Along with resistors and inductors, capacitors are one of the most fundamental passive components used in any circuit design. You would have to look very hard to find a circuit which didn't have a capacitor in it. Not only can capacitors be use in singular, they can be combined in parallel or in series. 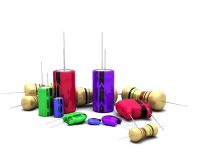 Capacitors hooked up in series combine as reciprocals. To get the reciprocal of a number (except zero has no reciprocal), just divide 1 by the number.
Note: As shown by the equation below, capacitors in series only hold a fraction of their individual capacitance!